Rain in the United Arab Emirates is, needless to say, scarce. Even when the

clouds look full of promise, or one is lucky enough to see lightning and hear thunder, it does not indicate imminent rain. On many promising occasions our hopes of rain have been dashed, so on Friday morning when I went for my walk without a cloud in the sky, rain was not even a vague possibility. Yet, shortly afterwards the sky turned from bright blue to pale grey, and later yet, lead grey. And suddenly talk of rain was in the air. Late afternoon, on our way to the beach, a light sprinkle of rain gave us hope. More people than normal flocked to the beach, and we could only speculate that the desire to experience the rain we all hoped for, was the reason for this. As we later headed home with our hopes dashed once more, our conversation turned to other topics.

Great was our surprise when we woke up to the splash of water on Saturday morning, as cars crawled

through the streets that now resembled rivers in some places. It rained! And even though it happened during the night without us witnessing this great event, we were happy. The amount of water on the streets did not reflect the amount of rain that has fallen though, as there are no drainage systems built into the roads here, so the water simply runs off and collects at the lowest point.

With a chill in the air and a sky filled with the promise of more rain, we decided to go for a drive to see how much it really rained. As soon as we left town all evidence of the previous night’s rain disappeared. Once on the road into Wadi Al-Baih the tyre tracks exposed dry sand underneath a very thin crust that 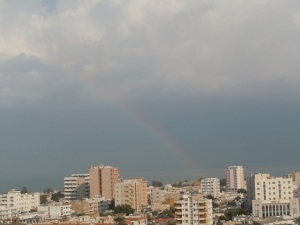 formed as a result of the sprinkle of light, soft rain. Clouds rolling up and over the mountains, gathering, compacting and once again lifting, allowed our hopes for a downpour to wax and wane. At least we saw our first rainbow on Saturday, even though it closely resembled that of a mirage. Michael is longing for one of those typical afternoon thunderstorms on the Highveld in South Africa, so a splatter of rain in the desert is hardly any consolation. We still hope to experience one of those rare downpours here one day, and who knows, I may even sing in the rain! Until then, we’ll be chasing rainbows in our dreams.

NOTE: Find pictures of Wadi Al-Baih in the Gallery Section.