“When are you going to take me to that fort you’ve been talking about for so long?” I asked my husband as the weekend was drawing to a close. “Today,” he immediately responded, knowing that I have been itching for some adventure.

We took the E95 out of Al Ain driving in the direction of Al Wagan, and were soon surrounded by endless stretches of desert. Dust clung to a pale blue sky, but the day was balmy and it felt good to be driving where I’ve never been before. Too soon we reached the turn-off to Segia Fort, but Michael loves driving and suggested we just keep going until we feel like turning around. My eyes love open spaces, and I was eager to allow them some rest from being glued to my computer screen.

The road more or less follows the border between the UAE and Oman, and is only separated by a narrow strip of farmland that lies between the road and border fence. Here verdurous date palms grow in profusion, forming a lovely complement to the rusty red dunes.

“That looks like a forest.” My husband’s voice interrupted my daydreams, and it was only then that I registered the rows upon rows of Ghaff trees to our right. All fenced-in it gives the impression of a farm, but we noticed some sign-boards, and decided it deserved a closer look. This meant that we had to travel another couple of kilometres along the highway to where the next u-turn was, back past where we were heading, and another u-turn, before we could eventually turn off onto a gravel road that led us to a rickety guardhouse and a locked gate.

The signs told us that what we were looking at was Al Ojair Wildlife Forest, and we wondered if one could actually visit it, as there were also signs indicating the presence of wildlife. After a rather confusing interaction with the guard who speaks no English, we gathered that it was not open to the public. We slowly drove along the road running parallel to the fence, searching for some movement amongst the trees. Michael spotted some gazelles, and I jumped out to take a picture through the wire fence.

When we reached the corner of the forest where it borders undulating waves of red dunes, we were grateful for the presence of power lines, as it meant easy access to higher ground and a better view.

The Internet later revealed that Al Ojair Wildlife Forest is one of the many projects of Barari Forest Management, an organisation that was born from the late Sheikh Zayed bin Sultan Al Nahyan’s “greening the desert” legacy. It is responsible for forestry, game management and other special projects. According to their website they take care of 14 million trees and 30 000 animals spread throughout the Abu Dhabi Emirate.

After allowing my feet free rein in the dunes, and endless desert shots with our new camera, we were ready to finally head towards our original destination – Segia Fort.

Sitting on the border, it is small, but lovingly restored. The view from the roof gave us expansive views into Oman. There isn’t much to see, and feeling sated with adventure, I was ready to return home. 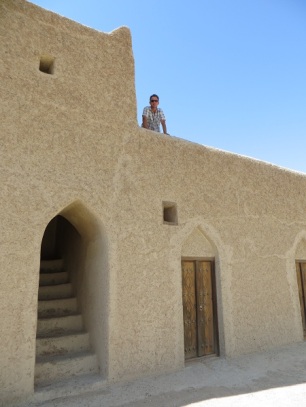 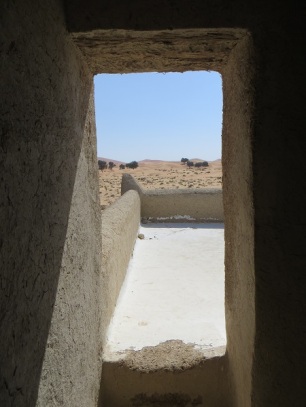 ← A Misty Wintery Morning
A Life in Monochrome →

One thought on “Finding a Forest”