You Cannot Book The Weather

A different rhythm shapes the seasons in the UAE. Kharif (autumn), shitta (winter), saif (early summer), and gaith (high summer) all sound, smell, feel, and look different from the seasons that used to structure my year. The early months of saif, which stretches from March to June, bring some of the most enjoyable weather to the region: balmy days, cool nights, clear skies, and even the occasional bit of glorious rain.

March is one of those near-perfect months weather-wise, and a good time to spend outdoors. The perfect time, I reasoned, to book a trip with Platinum Heritage to overnight in their desert camp located in the Dubai Desert Conservation Reserve. I enjoy playing tourist, but ‘dune-bashing’ is not my idea of a good time. As a result, I have always refused to partake in the very touristy ‘desert safaris’ on offer, as they always seem to include a heady, adrenaline-rush induced drive through the dunes.

Needless to say, Platinum Heritage is not for adrenaline junkies. Instead it offers more subdued game drives in an assortment of 1950s Land Rovers. Much more authentic, in my opinion, as these were the first cars to conquer this desert landscape. It didn’t take much to convince my husband to partake in this adventure, as his love affair with all things Land Rover started as a teenager. His mom found and bought a half-burnt out 1959 Land Rover for him, which he eagerly patched, repaired and worked on throughout the years, until he finally restored it to its original dusty blue colour and former glory.

Land Rovers, for him, hold a special nostalgia. Perhaps because his dad, as a young man, with a couple of friends, drove his Land Rover from his hometown in Kitwe in present day Zambia all the way through Africa and Europe to London. Working, and having fun and adventures aplenty along the way, it is one of those trips that conjure up romantic notions of wild adventures. 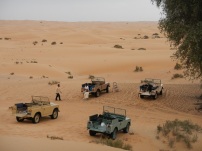 Pretty much the same way that ‘desert safaris’ evoke images of a past that is mostly imagined and romanticized. The descriptions of Bedouin camps paint an evocative and idealised picture of what life in the desert used to be like.

Platinum Heritage claims to be more authentic and less commercial than the other companies out there, and it is most probably true. There is no belly dancing for one, as it has never been part of local culture, and groups are kept small. A maximum of 40 guests are accommodated at any one time. The group is further divided into smaller groups of 6-8 with a designated driver/host who pretty much dictates the kind of experience you have, as he basically takes care of all your needs.

What cinched the deal for me were the following snatches of promotional material that promised various picture-perfect moments: “watch the sun drop under the horizon as you watch a falcon soar around you”; “a scrumptious dinner under the stars”; “relax beside a bonfire and enjoy the star filled night sky”; “awake to the smell of freshly brewed coffee, and a freshly cooked Arabic breakfast”; and best of all “hear fascinating tales first-hand from a local Bedouin who will be joining you for breakfast”.

I have lived long enough and travelled wide enough to understand that words can entice, fool, lie, and make promises reality simply cannot keep. To have very specific expectations more often than not leaves one feeling disappointed or cheated.

On the morning of our desert safari the wind was howling and moaning, while kicking up sandstorms in its fury. “What happened to those perfect days we’ve had for weeks?”, I wondered out loud, feeling more than a tad disappointed. My husband simply shrugged his shoulders. “It is what it is,” he simply replied. And so it was. Reality ignored the promises the promotional material made. Instead we met travellers from Holland, Spain and Finland who were not only delightful and interesting, but reminded us of the joys of sharing experiences with others. The wind gave us a short reprieve during the late afternoon and evening hours, and during the game drive we spotted Arabian Oryx and Sand Gazelle, and was even blessed with a couple of stray raindrops. 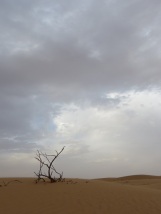 It was only just before bedtime that the wind started up again, and we were grateful to escape into our little private corner of the Bedouin tent infused with earthy smells. With a mattress far too thin, sand way too hard, and the sound of wind and rain all too close, our sleep was fitful and interrupted.

Grateful for the first morning light, we strolled through the dunes in search of a sunrise. We only found a momentary break in the ashen sky, but back at the camp coffee and lively conversation cured any sense of lingering disappointment. 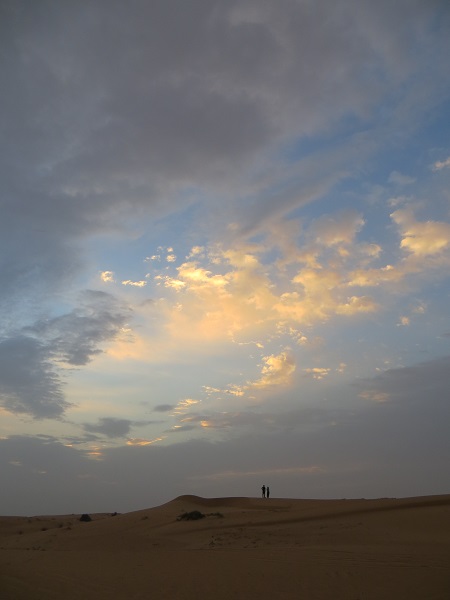 The local Bedouin was sick or away, and instead of ‘fascinating first-hand tales’, we had a question-and-answer session with his son. By the time breakfast was over, I was pretty much ready to head home. Sand has the uncanny ability to find its way into every conceivable nook or cranny, and a hot shower became a sudden obsession.

We had a wonderful time. Perhaps even more authentic than promised, as it was closer to the discomfort the Bedouin had to live with every day. Just enough anyway to serve as a reminder that life in the desert could not have been a particular comfortable one to be born into before the discovery of oil and the subsequent comforts it brought.

We were also reminded that it is our attitude that dictates our enjoyment, not the weather.

← An Ocean of Words
Dubai – From Small Town to Sprawling Metropolis →

23 thoughts on “You Cannot Book The Weather”