Our ancestors left us a legacy of traditions which make us proud.

Our mission is to preserve, develop and maintain it as an asset of this nation for generations to come.

It all started with a small, round watchtower built in 1761 to guard over the first precious water source found on the island of Abu Dhabi, but when Sheikh Shakhbut bin Dhiyab took up permanent residence here in 1795, he incorporated it into the building that was little more than a small fortified house. Around it a budding settlement sprung up, and so the story of, not only Qasr al Hosn, but the city of Abu Dhabi began. In the early 19th century Sheikh Tahnoon bin Shakhbut enlarged the fort to stand sentinel over a town that, during his rule, swelled to five thousand residents who lived mostly in barasti, or palm frond, huts. In the 1850s, Sheikh Saeed bin Tahnoon carried out improvements and turned the fort into a two-storied structure, but it was Sheikh Shakhbut bin Sultan, ruling from 1928-1966, who built the iconic palace, enclosing the initial fort completely, and giving Qasr al Hosn its present-day form.

From its earliest existence Qasr al Hosn not only dominated the flat, sandy landscape of Abu Dhabi island, but became one of the most recognisable landmarks on the then Trucial Coast. Built from coral stones and cladded in a local plaster, called juss, made from a mixture of ground coral, seashells, and sand that was burnt, crushed and mixed into a paste, it sparkled in the desert sun, greeting everyone who approached the city from both land and sea. Life unfolded slowly in and around the fort, and with its growth and expansion through time, it absorbed the stories of generations of people who helped build and shape the city – rulers, merchants, farmers, fishermen. The fort was a place to which ordinary people could bring their troubles or seek justice in the Sheikh’s majlis in a time when life held more hardships, but was lived closer to the earth.

Until 1966 it, not only served as a royal residence, but was also the political and military headquarters for the ruling sheikhs who have left an indelible mark on the economic, social and cultural life of the country and its people. Now, overshadowed by taller glass, steel and concrete structures, it may no longer dominate the physical landscape, but it is still intricately linked to the emotional landscape of the Emirati soul.

Now in its fourth year, a highlight of the Qasr al Hosn Festival is the guided tour that is run to visit the fort, which is otherwise closed to the public, due to the meticulous excavation and restoration of the fort by archaeologists from the Abu Dhabi Tourism and Cultural Authority. They are carefully chipping away at the concrete and paint in which it was covered during its 1976-1983 renovations, and along the way are discovering its many faces and stories.

The festival offers a unique glimpse into the past, highlighting Emirati traditions that are slowly receding from being part of daily life into the realm of folk lore. The festival provides an opportunity for tourists and expats alike to gain a better understanding of the customs and rituals of the country that has become known more for its wealth and excesses than its history. For older Emiratis it is a time to relive the past, while for the young, it provides an interactive learning platform and opportunity to engage more fully with the kind of life their forefathers lived, staving off cultural amnesia and ensuring that traditional knowledge is kept alive.

And amidst it all, Qasr al Hosn stands proud as a tangible link between the past and the present. 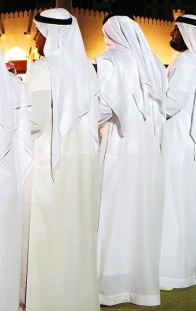 How much:  AED10 at the gate (including 2 activity passes)