Rules of the Road

Much have been written about the way people drive in India. Some of the accounts are laugh-out-loud funny, while others hint at condemnation or are laced with cultural snobbery. Yet, they all harbor the ultimate truth: India’s roads is an adventure worth experiencing in its own right. It will not only thrill, scare, delight, horrify, amuse or astound you, but will make you gasp in gratitude as you catch glimpses of your life flitting by.

The big trucks kindly asked you to: “HORN . . . OK . . . PLEASE!” And at night to use your ‘dipper’. As a result the daylight hours orchestrate a cacophony of horns, hoots and honks that vary in intensity and scope with every passing hour, while the nights bring a sinister quiet, brighter than a blazing sun, as lights replace horns. The assault on ones ears and eyes are almost soothing in their consistency and determination to burn a memory into one’s heart.

The rules of the road slowly dawned on me the more time I spent in the back of an assortment of cars. The most important rule is so obvious in its simplicity that it took me a while to grasp. Simply put, all road users are invisible unless they signal their presence through their dancing hooters. No one makes use of side or rearview mirrors, but stare straight ahead as if to pretend that they are shipwrecked on a desolate island, and it is only the sound of a deafening horn that will alert them to the reality of your presence. To prove the truth of this statement, one only has to realise that if an accident should take place when you are trying to overtake, it will be your fault if you did not blow your horn. “In order to survive the roads in India,” my one guide said, “you need four things: a good driver, a good horn, good brakes and good luck.”

Almost all the cars I travelled in had a little statue of the elephant-headed god Ganesha gently perching on the dashboard, and as the remover of obstacles I got the distinct feeling that he was a very busy god in India. I decided to put my trust in my drivers’ faith, and cheerfully chanted om gum ganapatayei namaha, a mantra that invokes Ganesha’s protection and blessing. Needless to say, we managed to avoid an array of  lurking accidents along the way.

In Jaipur I relished the slow unwrapping of the morning from my vantage point on the hotel’s rooftop with a steaming cup of coffee to ward off the early morning chill. The quiet streets, at first, were reluctant to wake up. The only sign of life initially came from the furious barking of two dogs, harassing a cow peacefully ambling along in search of tasty morsels, which it eventually found further along the street from a man in search of good luck. A lone bicycle rounded a corner laden with groceries, before auto-rickshaws and little mini busses with schoolbags stacked high on their roofs started darting into the neighbourhood to pick up schoolchildren. In front of the hotel the drivers of the tourist cars busied themselves by polishing away invisible specks of dusts or checking engines.

Once outside this quiet enclave the roads became oozing streams of humanity vying for a tiny piece of road: cars, trucks, buses, auto-rickshaws, cycle-rickshaws, cows, water buffaloes, working elephants, pedestrians, bicycles and carts drawn by hand, camel or horse. Demarcated lanes, even when clearly visible are either blatantly ignored or creatively reinterpreted. The result is a tight squeezing, inching and shouldering to gain space and forward motion. There is an occasional murderous glare and harsh words spoken, but for the most part everyone seemed quite tolerant of the situation and one another. That is at least what it looked like on the surface: I, as a foreigner, would certainly never be able to tell if anything was seething, brewing or bubbling beneath the surface, so it was best to sit back and enjoy life as it teemed past my protective bubble.

One driver insisted on traveling on the wrong side of the road around the many blind bends of a curvaceous mountain road, but instead of succumbing to heart failure, I managed to focus on the beautiful landscape framed by the side windows, and not only saved my own sanity but ensured that I had a pleasant trip. Drivers often drive, instead of in a lane, right over the painted line. Quite practical actually, come 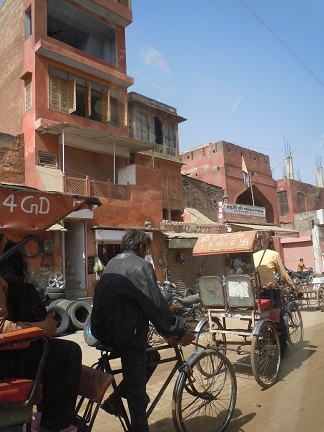 to think of it, as it allows for quiet contemplation and meditation without paying too much attention to the road. Somehow the slowest traffic always found themselves in the ‘fast’ lane, and when persistent hooting did not get them to move, drivers simply reverted to a playful game of weaving or dodgems, a there was always traffic in the ‘slow’ lane or shoulder of the road driving against the flow.

The saving grace of the chaotic roads lie in the fact that no one is driving very fast. I once had a rogue driver pushing 100 km/h on the highway, but most drivers hardly exceed 80 km/h, which on smoothly paved highways feel excruciatingly slow, but rollercoaster fast on narrow strips of road plunging into the heart of a sleepy countryside where social gatherings find themselves at times in the middle of the narrow track, or where overloaded busses take up almost all the space.

Long journeys left me with throbbing headaches and shaky limbs as the adrenalin wore off and the noise faded away, while shorter ones contained just the right amount of excitement for me to want more.