A Magical Day in Mandalay

“How dreary it would be if you could go everywhere and do everything. There would be nothing left to dream about, and dreaming, in my view, is often the best part of travel (and certainly the cheapest).”

My legs burn, as I pedal to keep up with my guide, sharing the road with buses, trucks, cars, scooters, bicycles, pedestrians, stray dogs, and a lone pink balloon drifting in the middle of this sea of chaos. The sunset waits for no one, and the road becomes more and more congested, the closer we get to U Bein bridge. Not that we expect much of a sunset, as low grey clouds have been our constant companion throughout the day. But I keep hope alive in my heart, and pedal harder.

Our support mini-van, which has kept us supplied with cold drinks and snacks throughout the afternoon, is waiting for us. We hand over our bicycles, and clamber upon a rowing boat with snacks and fresh coconuts in our hands. We join the rest of the rowing boats bobbing around, vying for a good view, sipping at the refreshing coconut water. The clouds open up ever so slightly, but the sun eludes us in what has become the quintessential spot in Mandalay for snapping a postcard shot of either sunrise or sunset.

Our guide waits for us half-way down the bridge, where we say goodbye to our boatman, and join the throngs of people strolling in the receding light. But postcards can be deceiving, as it mutes the blaring music, more suited to a club, blasting through giant speakers.

Yet, it is still the perfect place to end a splendid afternoon cycling through the ruins of the old Royal Capital of Ava, or Inwa, as it is now called, while also visiting various cottage industries, allowing for a special window into the lives of the people, who live in harmony with various physical remnants of the past. 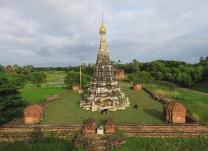 I started my day visiting a local market, and eating my way through various local specialities, with a lovely local guide. 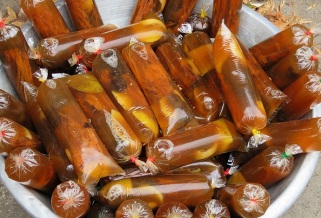 Mohinga is considered to be Myanmar’s National Dish, and although I am a vegetarian, I just had to taste this noodle soup made from a rich fish broth. Eaten mostly for breakfast, but available throughout the day, it is hearty and delicious. I loved all the deep fried snacks, and glutinous rice sweets and cakes, but it was the Tea leaf Salad that left the biggest memory on my tongue. The mixture of flavours in this classic dish is intense, and best shared or eaten with sticky rice. Made from fermented tea leaves, every household or restaurant has their own version, and as I discovered later in my trip, not equally memorable. 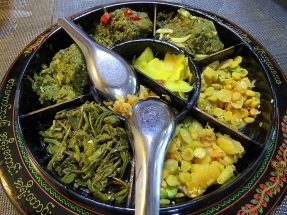 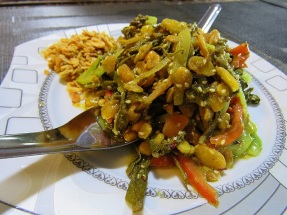 A full day in Mandalay is not enough to even skim the surface of this city filled with monks, monasteries, temples, cottage industries, and historical buildings. It is also a central point from which to explore the bigger geographical area on day trips, so to do it justice, one would have to spend more time here.

# Mandalay is not a pedestrian friendly city, apart from the wide walkway shouldering the moat, which surrounds the old Palace grounds. Here you will meet locals strolling, socializing or exercising, as it is a popular place to be, especially in the late afternoon.

# As I only had one full day in Mandalay, I decided to join two of Grashopper Adventure’s tours. The morning Foodie tour, contrasted beautifully with the afternoon cycling tour, and packed my day with an array of amazing experiences. The natural warmth, and ability of the guides to tell stories, and share their culture, were a welcome reprieve from so many guides elsewhere, who often tend to focus too much on facts and dates.

# Mandalay is one of only a few places in Myanmar that kept its name, when the government, in 1989, not only changed the name of the country from Burma to Myanmar, but also most place names.

“When a place is renamed, the old name disappears from maps and, eventually, from human memory. If that is possible then perhaps the memory of past events can also be erased. By renaming cities, towns and streets, the regime seized control of the very space within which people lived; home and business addresses had to be rewritten and relearned. And, when the regime changed the name of the country, maps and encyclopedias all over the world had to be corrected.”

– From: Under the Dragon by Rory Maclean

← The Timeless Beauty of Bagan
Myanmar: The Land of Green Ghosts →

38 thoughts on “A Magical Day in Mandalay”